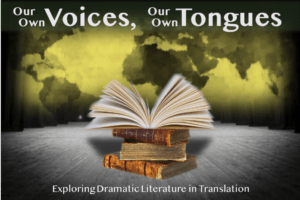 Performances and a town hall conversation that explore how the work of a playwright who is known around the world might change as that work is “adopted” by other countries and cultures outside of his native England.

Cen Liu is a Ph.D. student in Theatre and Performance at the Graduate Center of the City University of New York. Her research focuses on the theatre of Shakespeare and his contemporaries in England. She explores whether the public theatre has offered some imaginative and aestheticized forms of sacralization to compensate for the collective experience of faith once accessible through rituals and worships. Cen Liu has participated widely in university-based theatrical productions including Shakespeare’s The Tempest. Before coming to GC, she received her B. A. and M. A. in English from Peking University, and an M. A. in English from the University of Rochester.

Alison Walls is a Ph.D. candidate in theatre at The Graduate Center, CUNY, New York. An actor and director from New Zealand, she holds an MA in French from Victoria University of Wellington and an MFA from Sarah Lawrence College. Her publications include a monograph on 19th century French literature with Peter Lang, articles in The New Zealand Journal of French Studies, Language and Literature, Studies in Musical Theatre, and The Tennessee Williams Annual Review, as well as a short chapter in The Routledge Companion to African American Theatre and Performances. Her current project examines the “surrogate mother” character in U.S. popular theatre and film 1939-1963.